Even though I planned on starting with a Treelord Ancient as an early hero for my Sylvaneth army, a Spirit of Durthu appears in my painting area.

In the summer I started up an Age of Sigmar army as the Sylvaneth were released. I had always liked the models and the concept of Wood Elves and their tree-allies, so much I almost started with Wood Elves when I first began my journey into wargaming. Alas, High Elves came instead, and no I do not regret it. After all, in times of strife the woods awaken also in Avelorn.

My first big tree I planned on using, and still do I want to add, was the Treelord Ancient. And this boils down to the Ancient one residing with the Everqueen in the deep woods. But then the story of Durthu strook me again, and I read about how they still counsel the Everqueen in times of war, that they were cast out by her and now migrate back. Before my first batch of minis even had arrived I picked up the Get Started Box from our LFGS and started building.

Now, only yesterday, I managed to finish up the last part of painting, the sword, which I had waited for inspiration for to do. I still have the base to do, but currently lack the supplies to do it. (Click HERE to see how the basing worked out for my Dryads.)

After a comment in my batrep thread on Ulthuan asking for pictures I want to put some up already. Here’s for you, Prince of Spires! (Click HERE to see the battle report against Beastmen that Prince of Spires commented on.) 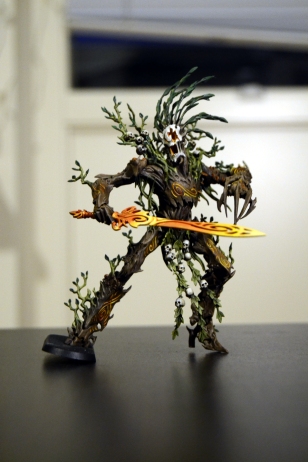 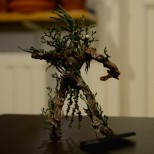 Thanks for looking! If you want to link to your Spirith of Durthu or Treelord Ancient, feel free to do so in the comments below, I’d be interested in seeing it.