Mr. Easter and I get through the second stage of our get-some-LotR-figs-painted quest. This time the topic was cavalry.

A bit back I posted the first entry in this tale-of-painteresque project. Now we have finally come past the second hurdle, a cavalry model. (At this point Mr. Easter will stop, sigh and  think “Now that buttock is dodging his rightful blame again!”. This is a valid point, but as he only thinks it will also be moot, and no one will know I finished three weeks late.)

For me the task was to finish my mounted Théoden model I have had half finished for years. But now, it was finally finished! So, while I am not too satisfied with the model, it is at least finished.  For Mr. Easter it was time to work on a Kataphrakt, and I actually think he played around with his airbrush a bit for this one – was it the primer? (So I get not only points for tardiness but for being a bad listener… sigh.) 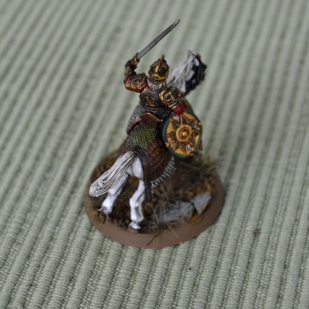 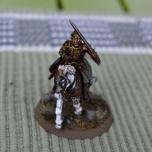 Next time, maybe by the end of September, the next part is due – infantry. I think Mr. Easter will do a warband of Morannon Orcs, while I will either finish my last 15 Dwarf Rangers or do a warband of Royal Guard.